Just a quick update on Ruby’s doctor appointments…we saw Dr. Bettis (neurologist) a week ago Friday to review the results of the 2nd MRI. Little did I know it was the first time he was seeing the 2nd MRI. The radiologists reviewed them right after the MRI and since there was nothing alarming (thankfully) they just reported back that there were no new strokes. A huge relief!

Nothing sounds sweeter to your ears than the neurologist sitting next to you saying things like, “wow, this looks great…not nearly as much brain damage as I thought there would be. I’m surprised.” Basically the two small strokes that showed up on the first MRI were completely gone. The damage from the big stroke was not as extensive as predicted. We hope to get images of both scans in the next week or two to show everyone but I’ll try to describe it in the meantime. In the first scan the large stroke shows up in the back on the left side and it is just a big white triangular area. Dr. Bettis explained that it shows up white because there wasn’t any blood gong to that area in the brain. In the second scan, that area looks completely different. It’s not white anymore and it actually looks similar to the other side of the brain. You can see where there is brain damage but from what we expected looking at the first scan the brain damage is minimal. We couldn’t be happier. We will see Dr. Bettis again in about 6 months!

Later in the day we saw Dr. Lee, the pediatric ophthalmologist. They did a few tests to make sure Ruby’s eyes react the way they are suppose to. She also held up objects to get an idea as to Ruby’s field of vision. From what she can tell so far there isn’t a blind spot on the right side. She told us what to look for if we think Ruby is doing things to compensate but feels very confident that Ruby’s vision will be normal. We have another appointment in 6 month and hope that the results of our visits don’t change!

It amazes me that five and half months have gone by. I can’t even begin to describe the fun we are having. I feel like God has totally spoiled us with such a sweet baby girl. And it has been amazing watching God work in Ruby and heal her brain. I continue to give thanks to God for all He does and the wonderful people He has put in our lives.
Posted by Kris & Leah at 5:50 PM No comments:

A couple weeks ago I caught Ruby looking at herself in the mirror that hangs from her play yard and laughing at herself…too funny.

I think Ruby is officially the cutest 49er’s fan ever! 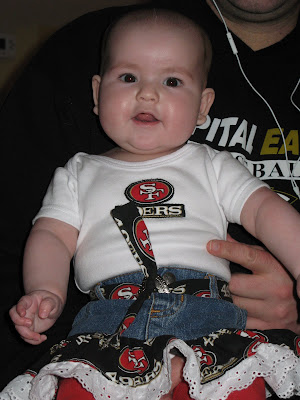 Kris caught Ruby on video midroll. This is the first time she has rolled over (on Friday). Yesterday we visited Granny and Gramp and she showed off by rolling over numerous times!

Whew…we made it to the New Year! I’m posting the rest of our pictures from Christmas-to-date. Prepare yourselves as usual there are a lot! We had a wonderful Christmas and enjoyed a visit from Grandma Linda and Grandpa Miller. It was wonderful seeing them but as usual their visit was much too short! Thanks to all our friends and family that spoiled us. We truly are blessed to have all of you (the readers and the non-readers of our blog) in our lives.

Oh and there will be more blogs today (hopefully). Ruby rolled over for the first time on Friday and Kris actually caught it on camera!