Well, you can now see where my good intentions have gotten us as far as more frequent blog posts.

Needless to say, completing our summer weekend in Boise (2 1/2 weeks ago) was a lot of fun. Saturday meant the annual Boise Capitals golf tournament for me, while Leah attended a couple of different parties for friends. That night, we went to the martini mix-off gala and met up with Mom, Bob, and Heather for dinner at Bungalow (in Hyde Park). On sunday, we started our day by walking the dogs (one of our favorite weekend activities), and then spent the afternoon just hanging out with Mom, Bob, and Heather before the the out-of-towners had to leave the next day. It was nice to be able to spend some time with all of them, as it is rare that we have the chance to all be in the same place for more than a few hours at a time.

Since then, we have been pretty busy doing other stuff. Leah spent the following weekend running (literally) between Stanley and Ketchum in the Sawtooth Relay, while I was up in Riggins with Brad catching a few salmon. I will let Leah fill you in on the relay, but the salmon fishing was great. Unlike last year, we were actually able to wear springtime clothing and not have to worry about thawing out every hour or so, which makes the fishing that much more enjoyable. Of course, Brad and his good friend, Bruce were awesome in helping me out and guiding me through the ins and outs of catching salmon. I ended up with two adult fish and three jacks for the weekend, and it is in no small part because of the two of those guys - I really appreciate their help and patience with me. We had a great time on the river, and on top of that, we have fresh salmon to eat for quite some time now.

I am sure we will post some pictures of the fishing trip and Leah's relay as soon as we upload them to the pc, but I am trying to stay on top of things and not let those types of issues get in my way of the posts.

That is all the time I have for now, but look for posts on Leah's half marathon (she is amazing), and iphones coming up soon.

Well, this isn't exactly as real-time as I was envisioning when I said that we would do this more often, but I guess that this is better than in the past. At least we are making progress.

I wanted to blog about all of the cool things we had going on this weekend as an example of all the great things that go on in Boise on a typical summer weekend. While we were able to do most of what we set out to do, the weather didn't exactly cooperate, as it rained for a while on friday, off and on all day saturday, and briefly again on sunday. All in all, we had over half of our typical June rainfall in one 24 hour period this weekend. Undeterred, we still got quite a bit in, so on to friday...

Our weekend got an unofficial start at lunch friday. We attended the 28th annual Greek Food Festival, hosted by Saints Constantine and Helen Greek Orthodox Church. This is an event that I have heard so much about over my years in Boise, but have never had the opportunity to attend. I believe it is their main fundraiser for the year, and I will say that they raise a lot of funds between friday and saturday. Even with the overcast weather, and going at a time when most were still at work, it was absolutely packed.

As the name indicates, the festival revolves mostly around the greek food that the congregation cooks up for the event. We tried to share the food in order to get in as many dishes as we could, and we still didn't get to half of what we wanted. We ended up with a Gyro, some Pastitsio (Macaroni layers with cheese and ground beef, topped with Bechamel sauce), a piece of Spanikopita (Spinach tirangles with Feta Cheese), and Dolmathes (Stuffed Grape Leaves with ground beef and Greek Herbs), and aglass of greek wine. While most of the dishes were quite a bit different than what we usually eat, they were all very good. About halfway through the meal, Leah was trying to figure out a way to get back for lunch teh next day. Of course, after the main dishes, we went to the pastry house portion of the festival, where they had all kinds of greek desserts. We went with the Karithopita (a walnut cake), a Galatobouriko (a flaky pastry outside with custard inside), and a baklava. All of them were wonderful, and we wish we had room for more.

In addition to the food, the offered tours of the church (which we missed) and quite a bit of greek music and dancing. They started with some of the younger members of the congregation performing the dances, but by the time we left, they were bringing up anyone who worked up the bravery to dance in front of hundreds of their closest friends. It was quite a scene, and I am really gald that we were able to make it this year. This will definitely be an annual event for us going forward.

After lunch, we both went back to work to finish out our days and try to digest our food as quickly as possible to make room for our next meal.

Our next meal came at The Melting Pot that evening. We had been lucky enough to see some posters downtown for this meal when we went to the Farmer's market the week prior. The Melting Pot was hosting a dinner centered around Rogue beers (one of Leah's favorites), and we knew that we couldn't miss it. We called our friends, Jadd and Tracy to ask if they would join us, and they signed up nearly as quickly as we did.

Unfortunately, Leah and Tracy got cuaght up with things that would keep them occuppied long past our 5:00 reservation, so Jadd and I decided that in order to keep the restaurant happy, we would head down and 5:00 and just try some of the offerings from the bar until the girls were able to join us. We both started with a martini, but also looked a little bit at the wine list. The owner of the restuarant cuaght us checking out the wine list, and he started asking us what we thought. The Melting Pot has a very good wine list for my tastes, but it is a little on the spendy side. Of course, I told him just that, and he actually took it in stride pretty well. We ended up talking about wines for about 15 minutes straight, and he later brought us a taste of some of the new wines he was bringing in. He is a great guy, and I think I will want to go their more often just because of his hospitality (and despite his prices on wine).

Leah and Tracy finally joined us at about 6:00, and we started our dinner. They did not prepare anything special food-wise, as the menu for the evening was fairly typical for a meal at the Melting Pot (artichoke dip, followed by a caesar salad, followed by a cheddar cheese fondue, then a meat fondue, and then finally the chocolate course for dessert). Also, like other visits to The Melting Pot, I was too full to enjoy the chocolate fondue at the end. That being said, they did do a good job of pairing the beer with each course, where both the beer and food complimented each other well. They served the Brutal Bitter with the spinach artichoke dip, the Morimoto Soba Ale with the salad, and the Dead Guy Ale with the Cheddar Cheese fondue (that beer was also actually mixed in with the fondue as well). The most unique pairing came with the meat course. The meat was all season with Cajun spices, and they served it with the Chipotle Ale. If you have never tasted the Chipotle Ale, it is definitely worth the experience - you may or may not like it, but I can almost guarantee that you haven't tasted anything like it before, and it went really well with the spicy meat. Lastly, they served the Chocolate Stout with the chocolate fondue to cap off the night. In addition to all of the good food & drink, they sent every couple home with two Rogue pint glasses and coupons good for a free drink the next time you visited for happy hour. We had a great time, and considering all that we got, we got a great deal as well.

We really enjoy doing this kind of thing from time to time, and fortunately, we get many opportunities here in Boise - the local restaurants do a good job of keeping things interesting for the most part. We definitely ate too much, but it was cool to try some new things that we may not have had before.

Unfortunately, we were exhausted and full after dinner, so instead of staying out with Jadd & Tracy, we went home, like old people do, to go to bed.
Posted by Kris & Leah at 9:32 PM No comments: 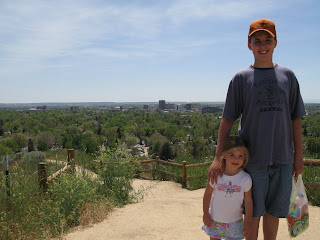 is won't be terribly exciting but it will be quick!

Morgan and Heidi spending the day with Aunt Leah. This picuture was taken at the top of Camel's Back Park... 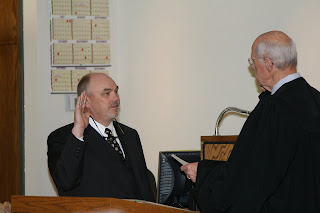 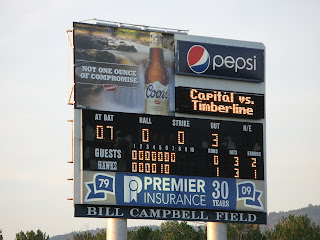 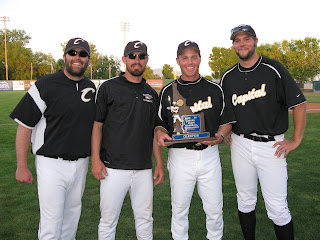 Bob - Here is the garden! Reminds me of the pecans!!!!
And the topsy turvy...I'll let you know if it works! 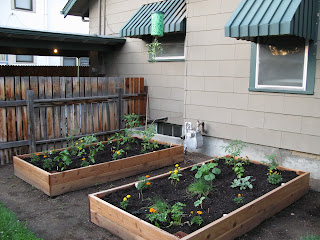 This one one of Elway is for Aunt Marty...the dog lover of the family...Elway on her throne. 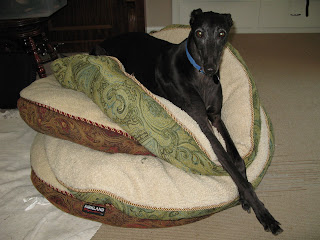 I can't believe how much time can go by between posts. It seems like we are always posting catch-up entries. Of course, I think Leah is cooking another one of those up, but I would like to start making a point to make these more regular so that they are more valuable for those of you who still check this out. We'll see how that works, but I am hoping to do more of this during the summer since our travelling may be a little more limited this year due to available time off. I cna say that they probably all won't contain pretty pictures, like Leah typically includes with all of her posts, but they should provide more regular information on what is going on with us.

I think the first of these regular entries will come this weekend, as we try to capture a busy summer weekend in Boise. It seems like we have quite a bit going on this weekend, and hopefully it will help everyone understand why we love living here so much and why this is such a great time of year to live in Boise.
Posted by Kris & Leah at 9:38 AM No comments: